Last time we checked on new registrations of plug-in hybrid (PHEV) and battery-electric (BEV) passenger cars in early-2022, it was Europe that was in the lead, slightly ahead of China. Back then, the U.S. market was clearly falling behind the two other major regions. Now, six months later, the picture has changed quite a bit, once more illustrating how dynamic electric vehicle (EV) sales still are.

Throughout the first six months of 2022, the market in China caught up. Electric vehicles made up almost a quarter of all new passenger car registrations, with BEVs accounting for 19% and PHEVs for an additional 5%. This is four times as high of a market share than in 2020 and an 8 percentage point growth over last year’s market share. As a result, China has already surpassed the 20% EV share target contained in the 14th Five-year-plan Energy Saving and Emission Reduction Work Plan, two years ahead of the target year of 2025. The main driver for the market growth in China remains the new energy vehicle (NEV) mandate, which requires manufacturers to produce NEVs to meet credit requirements and allows them to use extra NEV credits to comply with their corporate average fuel consumption requirements. 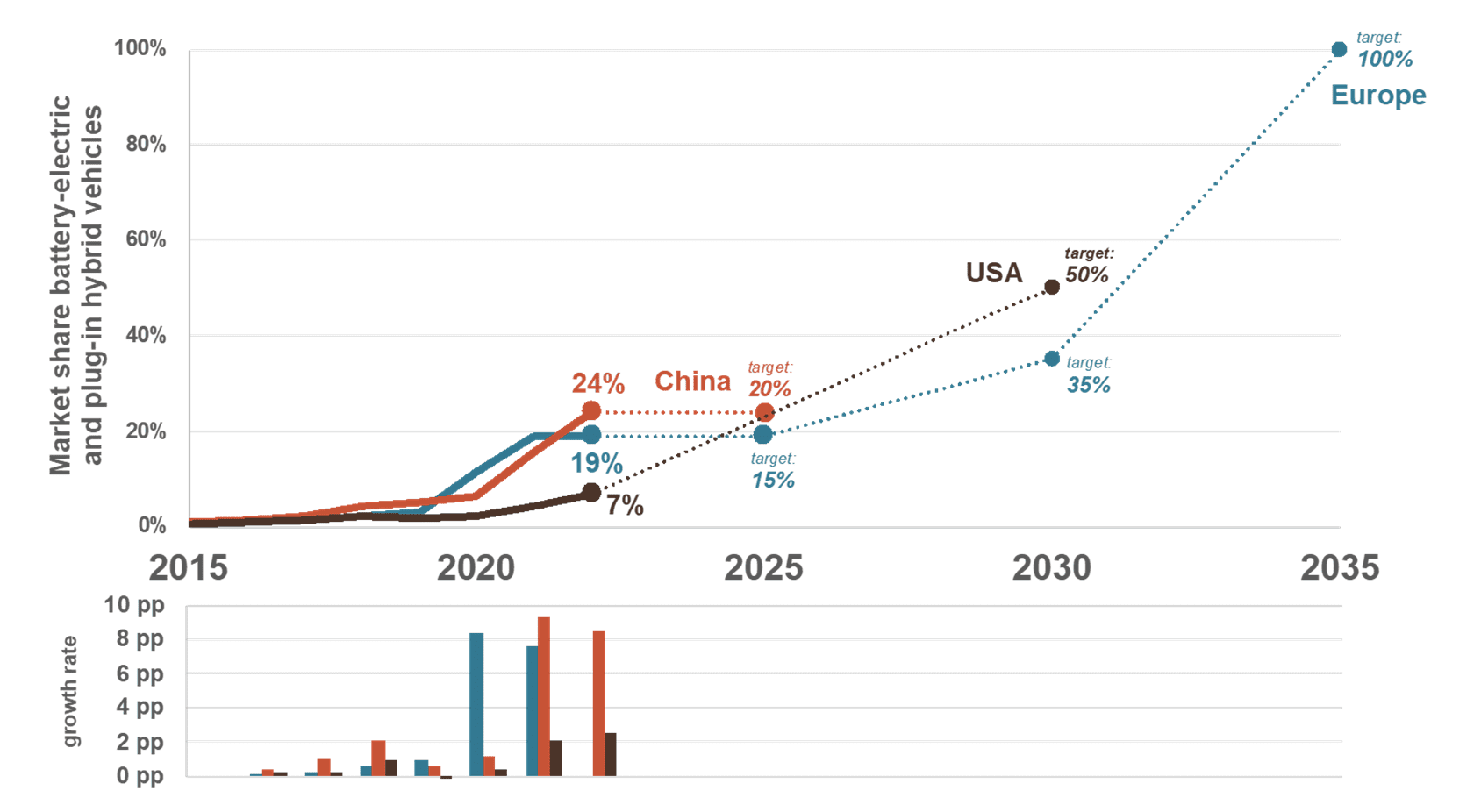 Historic development of the share of battery-electric and plug-in hybrid vehicle models among all new vehicle registrations as well as future targets, for China, Europe, and the United States.*

Europe, defined here as the European Economic Area, is now in second place, with a BEV share of 10% and a PHEV share of 9%. As a result of the European CO2 standards for new cars, which set an average target of 95 grams per kilometer (g/km) for 2020/21, manufacturers pushed a relatively large amount of EVs into the market, especially in 2020 when the EV market share almost quadrupled within one year. However, after vehicle manufacturers successfully met the 2020/21 CO2 targets without having to pay any penalties, their interest in EV sales seems to have waned somewhat. The next regulatory target mark is the 2025 standard—one that is far too lenient to have a strong impact on manufacturers’ portfolio strategies. In combination with tax incentives for EVs eventually being reduced in some European countries and long waiting lists for EVs due to the ongoing supply shortages, the market seems to be stagnating with a zero-growth rate so far in 2022.

The U.S. market has been behind for a while, but showed the strongest growth rate of all three major regions during the first six months of 2022. Over this period, BEVs accounted for 5.5% and PHEVs for another 1.4% of all new passenger car and light truck sales in the U.S. This is still less than in China and Europe but three times as high of a market share than back in 2020. The guiding regulatory signal in the U.S. is still the target of 50% EV sales by 2030 proposed by President Biden, although recent actions on charging infrastructure and tax credits for EV purchases will likely have an impact in the future.

In summary, while the EU’s 100% target for fully electric vehicles by 2035 clearly sets the global benchmark, the region is lacking any meaningful interim targets, especially for the years up to 2029. As a result, there is a risk that the uptake of EVs in Europe will continue to stagnate, similar to what we already saw during the first half of 2022. In China, on the other hand, the NEV mandate seems to provide a continuous push for EV sales, but the country’s 2025 sales target has already been met well in advance and longer-term targets are still absent. In the U.S., the proposed EV target is the most advanced one globally for the 2030 time period and seems to be supported from the revised light-duty vehicle greenhouse gas emission standards for model years 2023 to 2026.

As the first six months of 2022 have shown, one region can take over the EV lead market position from another region within an instance. In the end, it all comes down to regulatory standards and supplementing incentives, pushing vehicle manufacturers to offer attractive innovative products while at the same time pulling in consumer interest. What makes it so tricky is to find the right balance and timing, a struggle that we are eager to continue solving by providing data and analyses as we always do.

Annual update on the global transition to electric vehicles: 2021